There are three major revolutions in the history of humankind: The Cognitive Revolution, the Agricultural Revolution, and the Scientific Revolution, which we are in right now. By understanding how these revolutions have helped shape our species, we can see the possibility of artificial intelligence threatening our position of top-dog in the natural order.

Yuval Noah Harari is an Israeli historian and professor in the Department of History at the Hebrew University of Jerusalem. He writes about free will, consciousness, intelligence, and happiness. He focuses on the “cognitive revolution” that occurred 70,000 years ago when Homo sapiens replaced the Neanderthals and developed language skills and structured societies, moving upward as apex predators. The agricultural revolution and scientific method assisted this transition. He also focuses on the consequences of a possible biotechnological world in the future in which intelligent creations are surpassed by their own creations. He believes that Homo sapiens as we know it will disappear in a century or so.

He was born in Israel and grew up in a secular Jewish family,. He practices Vipassana meditation, which he said changed his life. He has published numerous books and articles and now focuses on world history and macro historical processes.

His book, Sapiens is based on 20 lectures of an undergraduate world history class he was teaching. The book was a success and was translated into 45 languages. It looks at human history, from the evolution of Homo sapiens in the Stone Age to the political and technological revolutions of the 21st century.

He won the Polonsky Prize for Creativity and Originality in 2009 and 2012. He won the Society for Military History Moncado Award for outstanding articles in military history in 2011. In 2012, he was elected to the Young Israeli Academy of Sciences. 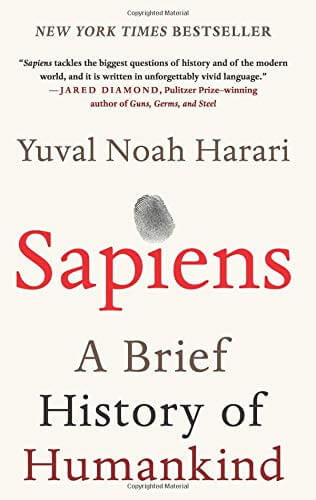