By Marcus Buckingham and Curt Coffman

The key takeaway is, don’t manage a team through leadership or through conventional appraisal systems. Manage them by placing members in the best positions for their talents. This will allow you to further assist them with honing those talents, and it will help drive the business forward.

Marcus Buckingham, born January 11th of 1966, was raised in the village of Radlett, north of London. As a child he suffered from a stammer which caused him to not speak much until the age of 13. In 1987, he graduated from Pembroke College, Cambridge, with a degree in Social and Political Sciences. While studying at Cambridge, he was recruited by the founder of Selection Research, Incorporated (SRI), which would later become Gallup Organization, to develop interviews that would allow businesses to match people’s talent with the right job roles. Based on the surveys and interviews Buckingham conducted with thousands of managers for this project, he was able to coauthor with Curt Coffman First, Break All the Rules (Simon and Schuster, 1999). The book became a New York Times best-seller. It was also selected by Jack Covert and Todd Sattersten as one of "The 100 Best Business Books of All Time.” Since then, Buckingham has created management training program. He has made numerous television appearances on shows such as The View, The Oprah Winfrey Show, Good Morning America on ABC, The Today Show on NBC, Larry King Live on CNN and so many more. Buckingham married Jane Rinzler in 1996, and they divorced 2017. They share a son, Jack, and a daughter, Lilia, who is an actress on the Brat network.
Curt Coffman’s main work regards changing the way organizations think about their culture, their managers, and their business results. His mission is to help organizations, their leaders, managers and associates to create more engaging, productive workplaces to secure the loyalty and growth of their customers and business. He is the Senior Partner and Chief Science Officer of The Coffman Organization. He formerly served as the Global Practice Leader for employee and customer engagement at the Gallup Organization for 22 years. His work launched a new era in employee and management development with First, Break All the Rules: What the World's Greatest Managers do Differently . He followed that success with another bestselling book, Follow This Path: How the World's Greatest Organizations Drive Growth by Unleashing Human Potential. His work has been translated in over 40 different languages. His research and writings have appeared in the Harvard Business Review, The New York Times, Wall Street Journal, Washington Post, USA Today, The Economist, and a host of other management journals. He is currently an op-ed contributor to the New York Times. He has been married for over 30 years to Tammy. They reside in Denver, Colorado and are the parents of daughters, Katie and Claire, and son, Clayton. 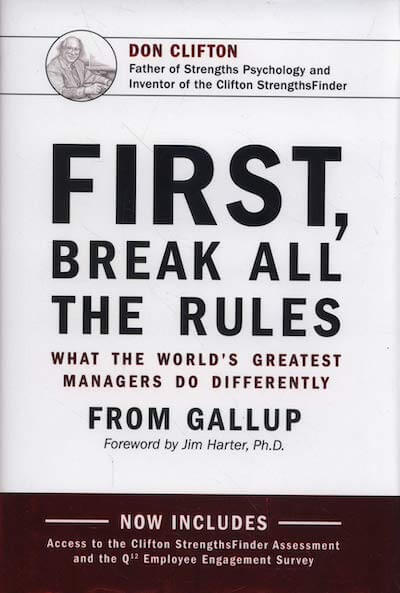